Just over ten years ago, I found out that I would be an “aunt” again. I sat in the living room of our house with a “close-to-due-date mama” and tried to ignore some of the elephant’s that were also in the room with us when she told me. What had mama been doing for prenatal care? What about her own self-care? What about the days and weeks we had spent together over the past 9 months when she had left to “go for a quick ride” somewhere every morning or she had sipped a beer or smoked cigarettes? What about the housing situations that kept not panning out? Or the three kiddos she already had that needed her attention? How were things with the husband she went back and forth on so many times? None of that was discussed. I had suspected her pregnancy but was never really sure. I have some regrets thinking about that time because she had been staying with me (along with her husband and their three other kids) that winter.

Why hadn’t I noticed?

When I had concerns, why didn’t I voice them?

What was going to happen with her, or the baby, when all of this came to light?

There was no way I could’ve known how anything would actually play out back then. I was 24 years old with three babies of my own and a house to keep up and a brand new job -just out of college. That mama and her husband were actually helpful to us in many ways  around the house while they stayed with us, we didn’t have to worry about the woodstove at all or the laundry for anyone … it wasn’t all bad. And actually without that time spent living together, I am not sure that four of my children would’ve been mine at all. I think because of that time, the parents were able to know, even years later, how loved their children were at our home.

After that winter, those parents moved back in with their own parents / in-laws –but their children never really left. They came and went, mostly the girls but often the boys too-  started with just weekends, than long weekends, school vacations, all of a summer vacation, and on and on for a year -and then …skip a few details…by October of the next year it was decided between their parents and the court that we would be their temporary full-time home. Just until the parents got well…

Let me go back for a second to that moment in my living room before I realized what was wrong. Before I watched the chaos of addiction for the next five years… before I read any of the stats on babies born in addiction and learned how to care for them.

Way before I saw anything that was coming next, sitting in that living room, talking with his parents, I knew this new baby was going to be a blessing. I knew he was very loved by all of us, me and his birth parents. His dad talked of a new tattoo, his mom talked about who he might look like. We all debated baby names. It was decided he would be a “Chace Joseph” after that day. And we laughed and talked about how tired we would all be once he arrived….

Mama’s water broke later on that afternoon in our downstairs bathroom. Her and her husband rushed off to the hospital leaving the kids with me and we anxiously waited by the phone to hear more.

That was the first time I was alone with the six kids for more than a day. I had to call my friend Tara to come help me. I remember feeling very outnumbered, which seems funny now.

I met Chace in the hospital at two days old, the delivery hadn’t gone well and he was in the NICU for quite some time after his birth. He was born addicted.

There is a harsh reality in addiction… the truth is it’s hard to know what to feel when you are on the outside looking in. You want so badly to hate the parents, you want them to realize what has happened, what they have caused. Your heart aches for this new little life and you just want to be mad.

But when I walked into that hospital that first day his dad greeted me with the biggest smile, and right away gave me the scrubs to wear and showed me the way that I had to wash my hands before I could enter the NICU to meet his newest son.  He was so proud of him. His mom recalled her labor story and the fear she had in the moment, and the relief she felt when her baby began to breathe. She wanted him to be well. We sat next to Chace in his incubator and talked about how he was so strong, a real fighter, and looked like his sister and his dad. We talked about how he might grow up to play sports or be in a band… it was hard to feel mad in those moments.

Addiction doesn’t make me as angry as it used to – but it does make me so incredibly sad. I believe with all of my heart that these parents did love their kids but they never got out of their own way to do anything about the situation and their choices. They still can’t. They have missed so much and it seems to be the way it will always be. That was solidified further in my mind when the adoption of all four kids finalized in 2013. A long five years after that first winter.

Our son Chace will be 10 tomorrow. He is every bit as wonderful as his parents and I pictured he would be. He is happy and healthy. He played on the football team this year. He invited 21 kids to his party because he just couldn’t narrow down his friends list down any further.  He continues to excel in all things academic. He is kind and he is funny.

But his road here was not easy. For him or for me. Giving any more of the details would be oversharing (even more than I probably already have) but what I can share is that I will never be as tired physically or emotionally as I was in the early years of Chace’s life. I have not wanted, and desperately pleaded with God for any child to be well more than Chace, which was true all the way until I met Noah.

Some stories are hard to explain and were harder to live through. But we did. And we can’t wait to see all that the future holds for this very special, super-wonderful, statistic-shattering kid!

” For I know the plans I have for you, declares the Lord, plans to prosper you and not to harm you, plans to give you a hope and a future” – Jeremiah 29.11 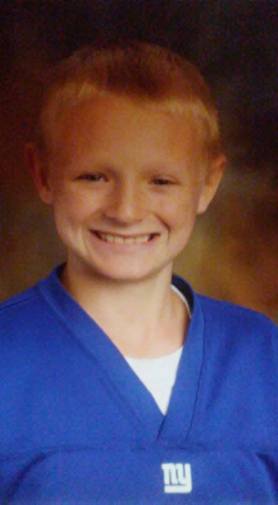 Join 205 other subscribers
Follow Life on Cloud Ten on WordPress.com