I must’ve drawn up plans every couple months for literally years. It became a regular thing, Bob and I would walk around our house debating how to re-work the layout, deciding how we could make more room or at least make the room we had more efficient. At one point we even turned the dining room into another bedroom and then within a few months turned it back.

Remember when I thought that our house felt so big? Those days were long gone. Our bigger kids were pre-teens at this point, and there were now 8 of them in total. In our house, you used to walk through the laundry room to the space where those plexi-glass and Christmas-light walls used to be. The back bay window was now a solid wall and there was a salvaged old window that was never quite installed correctly in the wall to the left of that. Our three girls shared half of that space which is now our back living room and two boys shared the other half. Two more boys were down the hall in another small bedroom and Colbie was still with us in our room in the loft with nowhere to go.

We painted, added decals, put carpet down, pulled carpet up, painted floors and polished ceilings and hoped that maybe we would sell the place and find somewhere we fit.

In prior years, we had an excavator come through the yard, we hired someone to remove all the trees we couldn’t remove on our own. I cleaned and painted and planted flowers and Bob hand raked every rock and car part out of every square inch of our over an acre lot. We’ve were paving the way for this all along.

All the while I was still drawing plans… we had all kinds of crazy ideas, ways that we could add to the cabin, remove the back of the house, or just remodel and move into the garage. At one point we were even submitting an application to that show with Ty Pennington thinking… “Move that BUS!” with no luck. There was a “Go fund me” account set up by one of our friends to get money to help that raised about $500.

When we couldn’t find a new house I remember almost feeling relieved even though we knew where we were wasn’t going to work. We were feeling 2 parts desperate and 3 parts invincible. I don’t know how or why we believed we could add on and stay put but looking back we were so sure it could work.

An architect offered to draw up my plans “officially” for $900- we couldn’t afford that. One of the first contractors that came to see our house and listened to our plans told us to take our money and run. We went to a home show and showed pictures of our home and what we intended to do and got a rough estimate of $350k!

Then we met the father of one of Bobby’s friends from school, Mike. He owned (and still owns MJS Construction). We gave him the thoughts we had, took him around our place, and walked him through the rooms and the yard. I remember him mentioning needing to use a chainsaw… and then all I remember hearing was YES! That was all that mattered. I showed him my latest drawing of a layout I had placed on our fridge with a magnet and he didn’t want a copy. Go figure. But we didn’t even care.

Next step was the bank… In the years that had passed since we bought the place, I had received a couple of raises, gone full time, Bob was working too so we applied for some money. Remember how I told you we had bought a shack? Well the nice thing about buying a shack is that when you pay on it for a number of years and fix things up a little at a time you build equity. Even when you don’t realize you are doing it. We were easily approved for a home equity loan, but it was only for about 75% of what we thought we would need.

Bob and I thought we could just finish the sheet rock, or the interior, or anything on our own to cover the difference. Ignorance was BLISS. And that ignorance allowed us to start our dream.

Bob tore the back deck off, he removed an entire bedroom from one side of the house with some friends. We gutted the back “bedrooms” to the studs and put up some plywood and tarp walls to get ready for the addition to start.

Meanwhile I reconfigured how we were going to live in what was left of our house. We had dressers lining the dining room walls and back to back down the middle so that each was accessible. There was a set of bunk beds against the wall, with two additional mattresses that we pulled out from under it every night and a futon that slept a total of 6 of the kids in the living room. Our kitchen table was closed down to its original size fitting only ¼ of our family at a time and placed in the center of our kitchen. Chace and Colbie were both in the loft with Bob and I in a toddler bed and a crib. We nailed a comforter to the doorway between us and the land of the tarps but it was also a barrier to our only bathroom which was kept intact down the plywood and tarp hallway. We heated that with an electric heater. And if you ventured a few more steps you would find our washer and dryer.

There was a birthday we celebrated where the futon broke and so those kids also moved to mattresses on the floor. Then there was a point the girls moved to the front lawn and stayed in the camper we had been gifted at our adoption party the summer before. There was one night that the big kids played “camp out” in the tarped back of the house and Bob and I rearranged the living room just to watch TV so we could feel “normal” when the cramped space got the best of us. And there was the day that the new addition and our cabin were connected, when the dormer was removed and our roof was just a tarp and it was snowing outside- all 10 of us stayed at my brother and sister in laws for the night. We spent that Thanksgiving volunteering at our church when we couldn’t host dinner and our Christmas tree spent the Holiday season on our front porch.

Weeks gave way to months and we had run out of money. Our contractor and his team worked around the clock, in the snow, with the chainsaws he mentioned, on weekends in between other jobs but faced with the final tasks, we went back to the bank.

We weren’t able to sheetrock – we couldn’t run proper electric or place windows… ignorance caught up with us but the bliss never left. The bank approved a mortgage based on what would be complete in the end and things were buttoned up and finalized.

Tarps came down, we picked out flooring, and it looked like a house! Bob painted literally all night long while we slept, he must’ve grown used to the overnight hours from keeping the woodstove going throughout the nights when we were staying in the cabin that winter. And I picked out all the light fixtures and the room décor. I was finally able to create the bedrooms for each of the kids that I had always wanted for them all along. It’s pretty amazing being able to walk through and enjoy a dream that was once all in your imagination. There is truly nothing like it.

Fast forward 5 years and our home now holds two more members, and a million more memories. We left that time of our lives with so much more than a bigger house, we left with a lot of knowledge and a closer bond with our kids that can only come from such an experience.

We were just rolling with the punches. Had we known what we were in for, would we have done it? Probably not. In fact, with the kids being older and bigger now, I am pretty sure we wouldn’t have been able to do it had we even waited just a few more years. But I am so glad we did. I am so thankful for everything that brought us to this place and kept us here. God certainly had his hand in it for sure.

But I can’t tell you how many times we’ve heard how “lucky” we are.

Here’s the thing, it all comes down to how badly you want something. And whether or not you are going to put in the time, energy, money, and heart to get it. What are you willing to sacrifice to pull it off? It comes down to God’s grace, a fantastic bank and a contractor who appreciates your dream. I wouldn’t call any of it luck actually.

Because luck didn’t rake those rocks or paint those walls, luck didn’t draw those plans or make sure that we would have the equity and the credit scores to proceed. Luck didn’t wake up to restock the woodstove, and it didn’t call every contractor until one agreed. Luck didn’t make that construction crew keep coming back. And luck didn’t turn our hair gray that year….But hard work did. (Contractor’s hair probably included, truth be told.)

…and since I can dye that gray hair in my own bathroom now –I’d say it’s all been worth it. 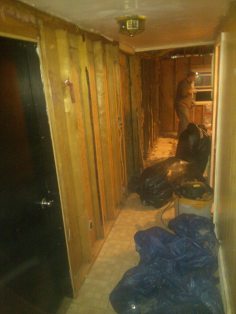 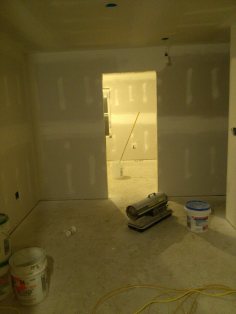 One thought on “Dreams don’t work unless you do…”