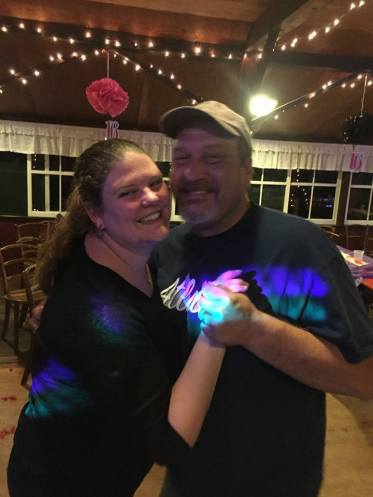 I have a “best friend” ring. There is nothing significant about it but if I am honest, most days it is more important to me than our wedding bands. It is the only ring that I have worn continuously for the past 16 years and it was given to me by a 23 year old boy that I was head over heels in love with who thought of me as a best friend.

There is something to be said for that best friend status that I certainly didn’t appreciate at the time. I was expecting an engagement ring, a wedding, a white picket fence but he came home that first Christmas with a “best friend” ring. I was pregnant we didn’t have anything but our cheap 1 bedroom apartment and a ridiculously insane dog between us.

Little did I know, that the “best friend” status would sustain us through the next 16 years, even when the wedding vows didn’t.

Thankfully, God knew better than we did. He knew that those two people were going to establish bigger plans (and raise more children) than they could’ve ever imagined and that they were the only ones crazy enough to keep trying in spite of everything around them. God knew that aside from everything else, they were truly going to be each other’s best friends no matter what they took on.

We were eventually married at 19 and 24 years old. Nearly babies ourselves, but now with a one year old in tow and 5 months pregnant with our next. We were essentially doing what we thought was the next responsible step. We picked out the rings together and made our plans only about a month ahead of the actual wedding. Our vows were handled by the town justice at the local sportsman’s club and my dress was off the clearance rack at the local bridal shop. It wasn’t one of those stories where you hear of love overcoming all the variables. In fact, I could go on and on about the variables I couldn’t see past back then (and even sometimes now) but that would defeat the purpose of the story. The point is, our road didn’t begin with the whirlwind fairytale that I had been hoping for at the time.

So I said those marriage vows at 19, but I didn’t understand them until I was 26 years old. I didn’t know what I was really signing on for all those years ago. There were a few years in our 20’s we didn’t wear our wedding bands, and one long winter we didn’t even share a home.

That “best friend” ring remained on through all of it.

And meanwhile, life kept happening around us. By the time we were putting our life back together with now 7 kids to raise (some from us, some from one of our own groomsman) – we began to actually be married. We began to realize that we were a solid team. That no matter what, our commitment was there, EVEN on the days that it didn’t feel like there was love.

Marriage can be hard. That’s the truth. In fact, any sustained relationship takes actual work and negotiating and practice. We are imperfect people who expect far too much from each other and come back for more the next day. Aside from the sheer stubbornness and brokenness in both of us- and that solid friendship, we might not have made it this far.

Our first date was Dec 15th, 2001. As we approach that day 16 years later, I can now say with all honesty that we are very much in love. I can tell you that those vows became true over time. I can see how every bump in the road we took to get here, had an important lesson that came with it- especially the ones that were the hardest to learn. I think those early shake ups helped to prepare our hearts and minds for the daunting task of raising 10 kids.

Our commitment to each other in spite of circumstance sustained our marriage. And it sustains us in parenting as well. There is no task we won’t take on or get through together for each other or for our children. There are days when the commitment exceeds the love felt for sure. There were many instances when we didn’t know what we were getting in to and I’m still sure we still have no idea… but you know… the more time goes on and the more we are able to balance, work through, and overcome together- I realize that the choice to start with a “best friend” status that first Christmas together might’ve been the right one after all.

Join 205 other followers
Follow Life on Cloud Ten on WordPress.com